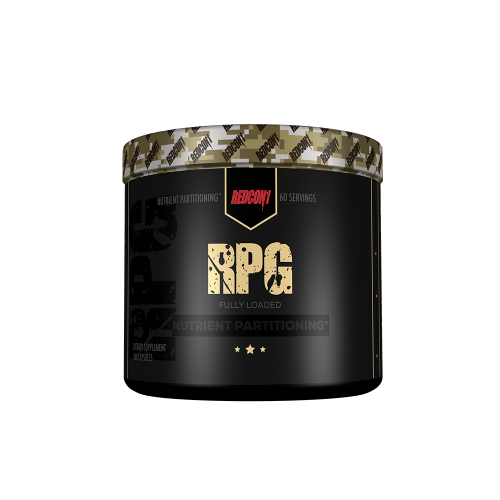 If you know what an RPG is, then you would know its designed to get maximum effect in 1 swift hit.

Just like RPG artillery, Redcon 1 have created a product that is designed to release at speed into the bloodstream followed by a rapid effect on controlling blood glucose to ensure energy restoration and muscle growth support are optimised.

When you consume carbohydrates, the Pancreas releases Insulin into the blood stream, which is a hormone responsible for controlling blood sugar levels by reducing the sugars circulating and storing them elsewhere. Sounds simple right?

However, in individuals carrying excessive body fat, insulin sensitivity can be reduced, meaning they need more insulin to store carbohydrates and in turn, this can negatively effect health long term. Known as poor blood sugar regulation, individuals who do not use insulin effectively tend to carry more body fat and have reduced muscle growth potential as well.

Known as a Glucose Disposal Agent (GDA), RPG acts as an insulin mimick, meaning it acts like insulin by controlling blood sugar levels, but without releasing insulin itself.

Similarly, key ingredients found in RPG have also been shown to prevent glucose release at the liver, meaning lower blood sugar levels, and also increasing the sensitivity of insulin, meaning less of the hormone is required to store carbohydrates and a more positive hormonal and blood sugar environment is achieved.

Extracted from multiple herbs, Berberine has been shown to reduce the release of glucose from the liver, which supports keeping blood glucose levels lower on a daily basis but has also been linked to increasing insulin sensitivity. Most impressive, Berberine when dosed appropriately has been shown to perform on par with the pharmacological diabetes drug known as Metformin and offers a fantastic natural alternative for those who do not wish to use pharmaceutical medication.

Gymnema and Cinnamon have been combined to support blood sugar regulation, whereby consistent long-term use has shown an improvement in blood sugar control in users of both extracts.

rALA is a naturally occurring fatty acid that is metabolically active within the mitochondria and plays a primary role in fighting against reactive oxidative species, which cause inflammation and are linked to increasing the speed of ageing. Supplementing with rALA has been shown to improve oxidative stress control and is also recognised as an insulin mimic due to its positive effect on blood sugar regulation as well.

Whether you are looking for an assistive product to drive carbohydrates into the muscle for maximum growth or you are struggling with fat gain and blood sugar regulation, using RPG 2-3x daily may benefit both of these goals.

Avoid consuming RPG when fasted as this product may cause hypoglycaemia (low blood sugar) and it should be dosed at approximately 2 capsules for every 25g of carbohydrates consumed.

Before changing any medication controlling blood sugar levels, please consult with your specialist.