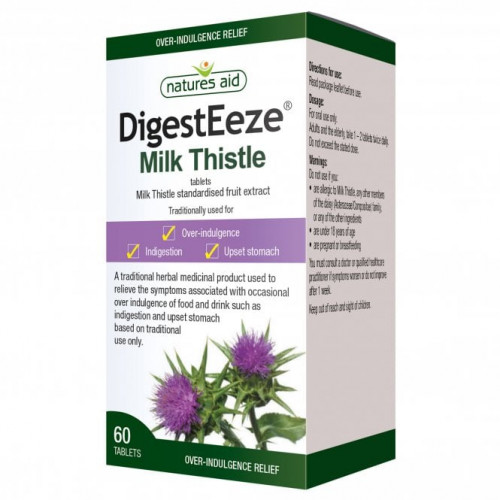 DigestEeze is a traditional herbal medicine made using Milk Thistle. Milk Thistle is also known as holy thistle, lady’s thistle and St. Mary thistle, and has been used in various herbal remedies for over 2000 years - dating back to the Ancient Greeks and Romans. Milk Thistle is native to the Mediterranean region, it is a herbaceous annual plant – a thistle with a dense prickly flower head which contains purple tubular flowers.

DigestEeze Milk Thistle is a traditional herbal remedy used to help relieve the symptoms associated with occasional overindulgence in food and drink, such as indigestion and upset stomach. This use is based on traditional use only. If your symptoms have not improved or they worsen after one week, it is advisable to consult with your doctor or qualified healthcare practitioner.

Each Natures Aid DigestEeze tablet contains 137.5mg – 165mg of standardised dry extract from Milk Thistle fruits, this provides the equivalent to 2750-6600mg Milk Thistle fruit. This tablet is vegan friendly and free from common allergens such as gluten, yeast, dairy, soya and nuts.

Like all medicines DigestEeze product can cause side effects for some users. Possible side effects may include mild allergic skin reactions, upset stomach and headache.